...the Speed River that is! 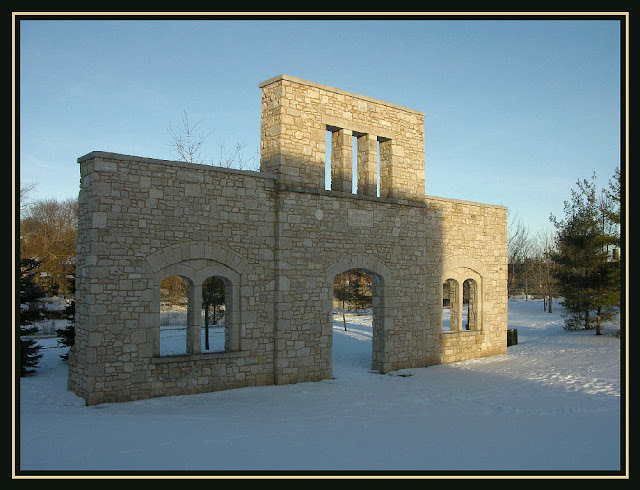 Yesterday, I showed reflections in the curved windows of the River Run Centre, Guelph's modern Concert Hall. This is a photo of the front wall that was re-built after a huge fire in 1991 as it says below:

In 1882 the Speed Skating Rink opened on the site of River Run Centre where fancy dress carnivals and balls were regular fare. In later years the Speed Skating Rink was used as a warehouse, and in 1991 the building was destroyed by fire. Stones from the front of the building were kept for reconstruction of a façade in the parkland in front of River Run. Four years later, in 1995, construction of the new performing arts centre began.

The sun had almost set so the wall is mostly in the shadows. 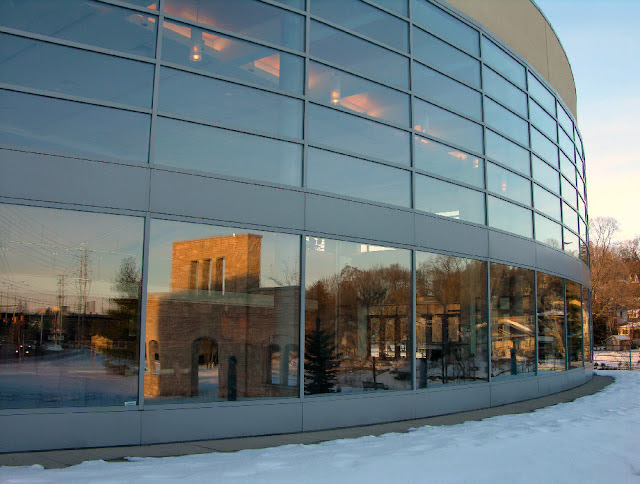 Reflections in the round end wall of the River Run Centre shows the wall of the old Skating Rink that was re-erected after a major fire.

And next to that, the main railway line through the city can be seen.

Many lovely dinners are held in this area of the River Run Centre behind the vast windows. In November, there's a lovely display of about 25 or 30 (or even more) fully decorated Christmas trees each one decorated to a specific theme and the lights of the trees shining out from these windows above is a lovely site. Just before Christmas, all of the trees are delivered to Seniors' Homes in the city and hospitals.

Inside the River Run Centre

While we were taking the photos outside of the Speed River and other scenes around the City Centre, we were invited into the River Run Centre to warm our fingers.

This was so nice as I was absolutely freezing.

Just grabbed this photo from the centre stage area of the empty auditorium before I left. 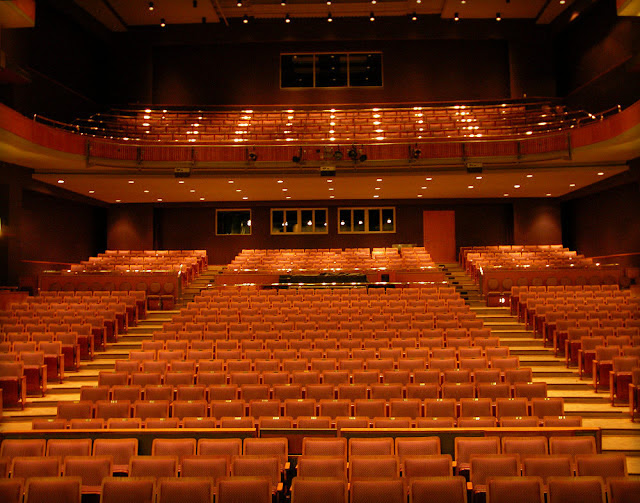 About the River Run Center 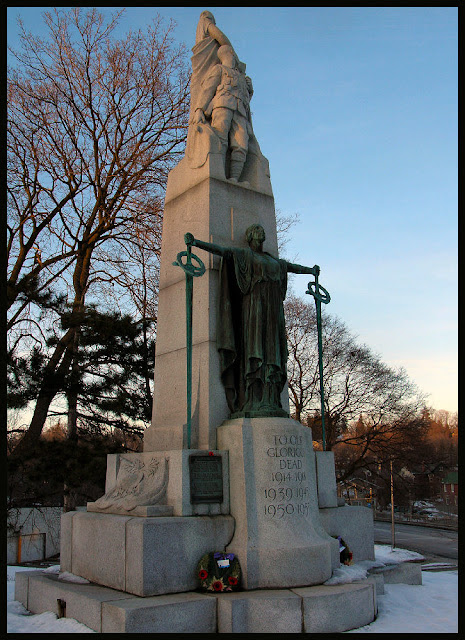 I drove past the Cenotaph this evening and there are still wreaths there from November 11, Remembrance Day.

It's actually quite touching to read the inscriptions. 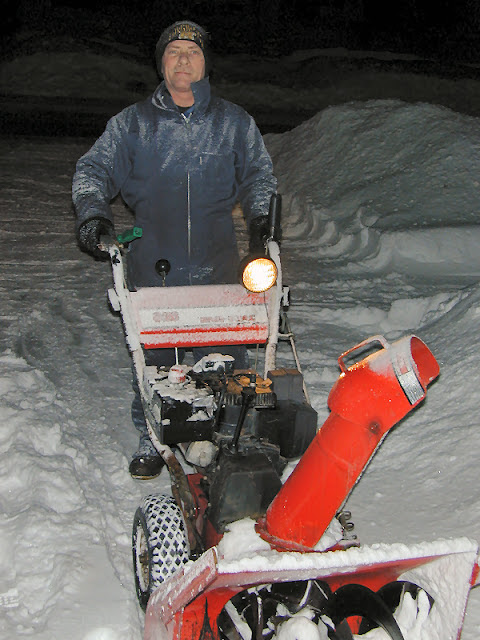 When it snows heavily, we have to dig but when a neighbour has a snowblower and is kind enough to do the job for you, that's wonderful.

This is the kind neighbour who keeps my driveway cleared after a heavy snowfall here in Guelph!

Dusk on the Farm 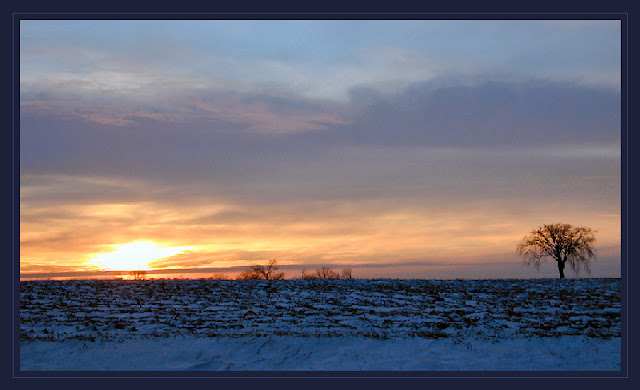 Today has been a busy day for me filled with appointments but on the way home, I saw this lovely sunset at dusk on a farm just about a mile from where I live.

Waiting for Spring at the Golf Course

Just south of where I reside in Guelph is a Golf Course and my eyes were drawn to the bench outside of the Clubhouse.

I'm sure that all of the members of this club are eagerly waiting for spring to arrive! 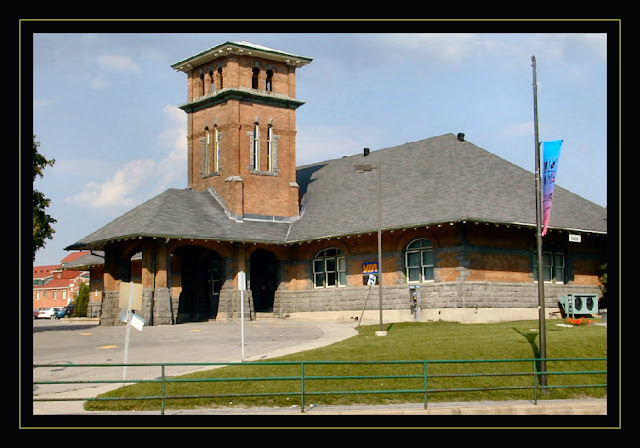 This is our Railway Station for Guelph. We are on a main railway line where Amtrak trains travel through on their way to Detroit, Michigan and further cities such as Chicago, Illinois, etc. There are GO Trains (Government of Ontario) leaving and arriving in Guelph from Toronto each day for commuters to their jobs in Ontario's capital city and many areas in between. The city’s Canadian National Railway (CNR) station is located beside City Hall.

The other railway station (Canadian Pacific Railway) was called the "Priory" and used to be the home of John Galt in the 1800's.


From the Guelph Archives:
The Priory was the first permanent structure built in Guelph (1827) and was named after Charles Prior, one of the men that accompanied Galt at the City's founding. Initially envisioned as the headquarters of John Galt's Canada Company, the Priory served a number of functions. It was the residence of John Galt, was used as the first post office for the city, and also housed a tavern. In 1887, the Priory began to be used as a railway station, in which capacity it served until 1911. The picture shows the Priory during its tenure as Guelph's railway station. This picture probably dates from around the turn of the 20th century.

Behind the Wellington County Courthouse 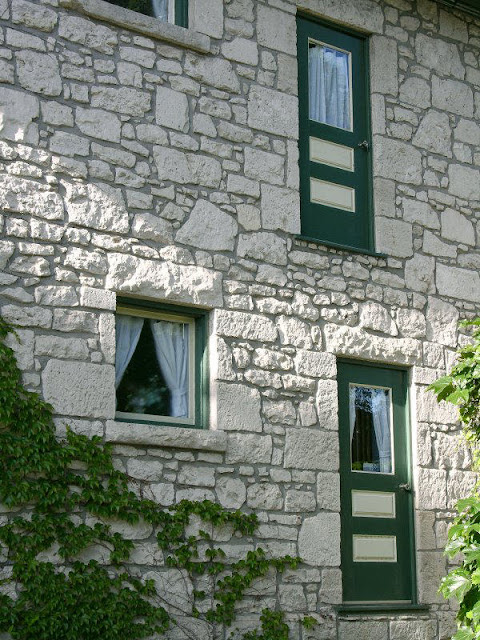 The photo above really caught my eye as the doors have no steps to them. This building is beside the old jail behind the current courthouse.

When Guelph became the County Town in 1837, it assumed responsibilities for the administration of justice in the County. Having no courthouse or jail, the City turned its attention to building appropriate facilities. In the interim, Guelph dispensed justice from rooms rented in local hotels, such as the Suffolk Hotel and the Red Lion Inn! The jailhouse was built first in 1839, by William Day, with James Lindsay being the first person confined (for cattle stealing). The contract to build the courthouse was given to local builders William and David Allan who used designs probably provided by Toronto architect Thomas Young.
From the GPL Archives

Church of Our Lady Immaculate 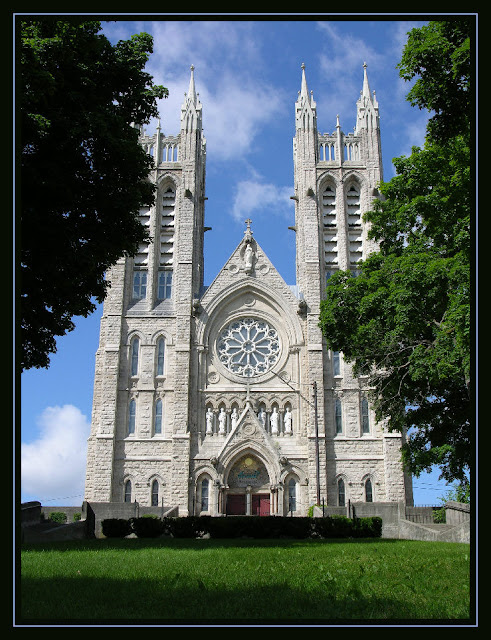 Church of Our Lady Immaculate

It's difficult to get a good photo from this viewpoint as the traffic on the busy streets must stop while you run out into the middle of the intersection. :)

From the earliest days of the settlement of Guelph, Catholics have played a role in the life of the community. Bishop Macdonell, the Bishop of Kingston, who was responsible for the Catholic Church in Ontario, was a friend of John Galt, the founder of Guelph. He had supported Galt's work with the Canada Company, which was charged with developing much of the land in southern Ontario. When Galt established the new settlement on April 23, 1827, he gave to the Catholic Church the hill in the center of the town. In is Autobiography he writes: "a beautiful central hill was reserved for the Catholics, in compliment to my friend, Bishop Macdonell, for his advice in the formation of the Company." A road was cleared leading up to the hill: Macdonell Street. In the autumn of 1827 Bishop Macdonell was one of the first visitors to the new settlement. 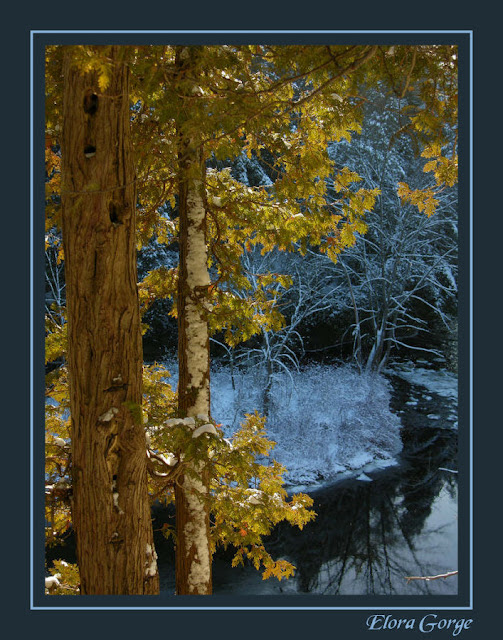 Not far from here is a little village named Elora. There's a fantastic gorge there in which flows the Grand River. The Grand River is probably the longest river in this part of Ontario and it flows into Lake Erie, one of the Great Lakes.

When this photo was taken, it was about 5:30 pm and the setting sun was shining so brightly on the higher ground where I was standing but the gorge itself was almost dark. The oak tree's leaves had not fallen off and the sun shining on them made the scene so bright and golden. I must go up there again and take more photos as I really like this area and it's not far away!

"Hats" on the bird feeders! 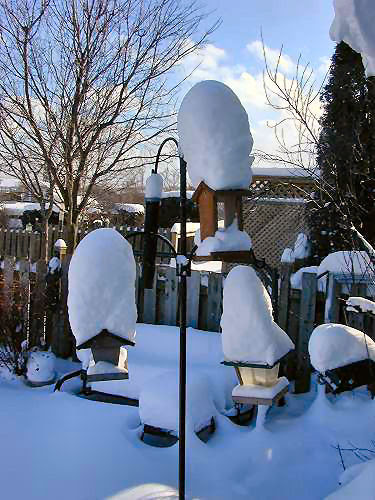 I was letting my border collie, Geordie, out to "do his business" a little while ago and this is what the bird feeders look like!

For the whole month of December and most of January, we thought that winter had forgotten to visit this city but now it's here--and here with a vengeance. 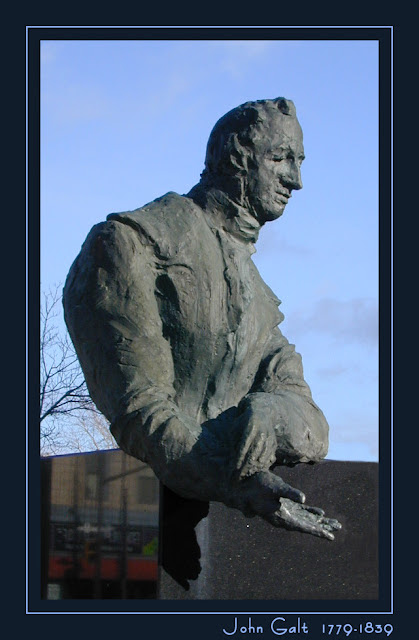 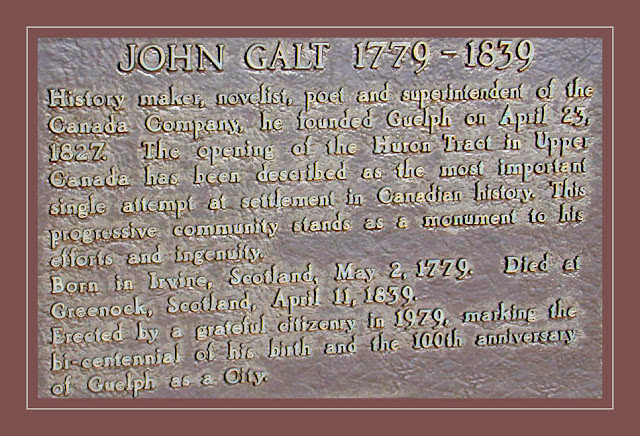 History maker, novelist, poet and superintendent of the Canada Company, he founded Guelph on April 23, 1827.

The opening of the Huron Tract in Upper Canada has been described as the most important single attempt at settlement in Canadian history. This progressive community stands as a monument of his efforts and ingenuity.

Erected by a grateful citizenry in 1979, marking the bi-centennial of his birth and the 100th Anniversary of Guelph as a City. 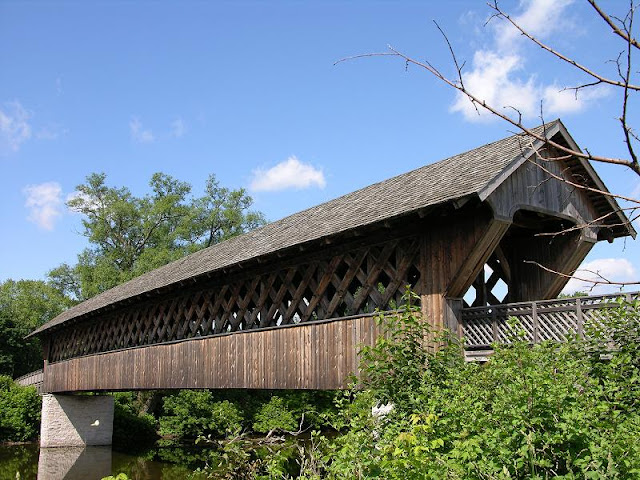 The two rivers running through the city of Guelph join where this bridge crosses. It's actually spanning the Speed River and just to the south is the Eramosa River.

In 1992, the Timber Framers Guild met in Guelph and during the month of June, 400 framers built this pedestrian lattice-work bridge and erected is across the Speed River. It's a very popular place near to the city centre.